Category Archives: U.S. Congressman Is In Israel To Study Move Of Embassy to Jerusalem

U.S. Congressman Is In Israel To Study Move Of Emabassy To Jerusalem 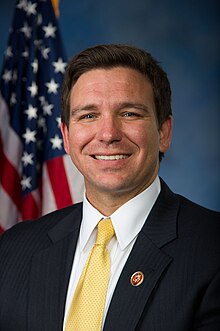 U.S. Congressman Ron DeSantis is reportedly in Israel this week for the express purpose of gathering on-the-grounds-facts concerning moving the U.S. embassy. Apparently his delegation will report back to congress.

The JERUSALEM EMBASSY ACT was passed by congress in 1995 for this very purpose and for recognizing Jerusalem as Israel’s undivided capital.

I salute this smart, courageous and zealous man for his wise insights. It is men like this, that keep America from being overrun by Satan and his liberal cohorts. This is the type of man that is not interested in pretend and empty rhetoric. Senators Ted Cruz and Marco Rubio are also to commended for their bold support for moving the embassy.

The Mohammedans claim, that moving the embassy to Jerusalem will cause the region to erupt into violence. This is simply code for: “We Mohammedans hate Israel and Jews and we will make sure, that America feels our wrath for doing anything like this, that we disapprove of.”

The U.S. should take the opportunity to remind the Mohammedans, that this is our embassy. We do not consult with Mohammedans concerning where to place our Israeli embassy. The Israelis desire for America to move its embassy to Israel’s capital Jerusalem and that is good enough reason.

The Mohammedans should also be notified, that if they endanger our ally Israel or any American citizen over this issue, then they will be met with brute force from the U.S. military.

The USA should also notify the Mohammedans, that every move of violence will be met with the USA facilitating more Jewish building in the West Bank and East Jerusalem. Every negative move by the Mohammedans should only result in strengthening Israel’s position on the ground between the Jordan River and the Mediterranean Sea and from Dan even to Beersheba.

Psalms 122:6, “Pray for the peace of Jerusalem: they shall prosper that love you.”

Filed under U.S. Congressman Is In Israel To Study Move Of Embassy to Jerusalem