Azab, a proud Muslim man, prepared to do service to Allah. As he stood behind the devout Christian captive, he felt so proud.

“Christians and Jews are the scourge of the earth”, he said to his jihadi buddy Kazim, as they prepared the public execution with knives in their hands.

“Ain’t that the truth?” replied Kazim. “We are so honored to be chosen for this service.”

Suddenly, the ground began to shake where the people were gathered. The stone building next to them collapsed, dumping tons of stone on top of their heads, instantly killing both Azab and Kazim and dozens of others assembled there. Azab opened his eyes in a strange place and quickly glanced around at his surroundings. Yonder in the distance a dark being approached menacingly. He grabbed Azab by the nape of the neck and began dragging him toward a strange red/orange glow.

“Come with me!” the dreadful being commanded.

“Where are you taking me?” Azab whimpered in fear.

The creature glared at Azab without another word, as he dragged him slowly and steadily ever nearer the red/orange glow. About one third of the way there Azab saw Kazim being dragged in the same direction by a similar creature.

Kazim wrenched his body around as best he could in the direction of Azab. His eyes were filled with fear and tears were streaming down his face.

“Azab!” he shouted back. “Something terrible is happening and I just don’t understand. That Christian guy we were about to behead was pleading with me to not take part in his execution. He warned me, that if I did not repent to Christ, then I would go into eternal damnation. He begged me to reconsider my course of life, but I would not listen. I think they are dragging us to eternal damnation.”

“Eternal damnation?” Azab questioned. “But we are supposed to be received by 72 virgins. This can’t be happening!” he wailed.

As the red/orange glow drew closer, they could hear screams growing louder with every step. The creatures dragged the two of them up to the edge of a great precipice. Azab and Kazim twisted and turned violently, trying to break free from their hold, but to no avail. One of the creatures began to speak as the other creature laughed hysterically.

“You boys have been deceived into believing a great lie. Everyone knows, that you cannot murder your fellow humans and go to heaven. You should have listened to your Christian captive while still yet there was time. We were afraid he might convince you to change your heart. Koran 19:88-92 cleverly distorts the truth of YaHVeH’s Son Yahshua Jesus being the Savior of the world. Thankfully the earthquake ended all hope of you changing your minds. You two are hereby confined to the pit until trial on the judgment day. YaHVeH will hear the facts of your rebellion, just as He will hear the facts of our rebellion at that time. Until then, good-bye and good riddance.”

The two creatures leaned their heads backward in hideous laughter as they lifted Azab and Kazim above their heads and threw them headlong into the abyss. The terrified screams of Azab and Kazim faded in the distance as they disappeared from sight.

Whosoever will, let him take of the water of life freely. Revelation 22:17 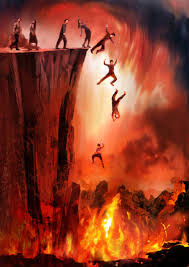