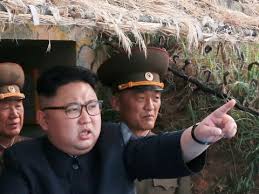 The most difficult problem of dealing with North Korea’s Kim Jong Un is the fact, that South Korea’s capital Seoul is a mere 35 miles from the North Korean border. Approximately 10 million Koreans live in Seoul. If Kim Jong Un could successfully launch one of his nuclear bombs 50 miles into the heart of Seoul with successful detonation; the loss of human life would be catastrophic.

The United States is a sort of guarantor of South Korea’s security, and has 28,500 military personnel stationed inside South Korea. Should a pre-emptive strike be undertaken against North Korea; it would necessarily have to be incredibly successful, because a nuclear retaliation by North Korea into the heart of Seoul, if successful, would show the world just how vulnerable the world is in spite of overwhelming U.S. military superiority.

I propose, that the United States instantly raise South Korea to nuclear-power status. The U.S. would install world-class nuclear tipped missiles permanently in South Korea with the capability of reaching anywhere in North Korea and parts of China. South Koreans would be trained to operate these installations on their own. The USA and South Korea would enter a mutual understanding, that the South Koreans could fire these missiles at North Korea if they so choose, and without permission from the USA to do so. Fail-safes would be put into place in case a South Korean government ever went rogue. The United States would hereby be relieved of PRIMARY responsibility for defending South Korea from the reckless Kim Jong Un.

I propose, that the USA permanentize its navy anti-missile batteries in close proximity to North Korea, because China has willfully squandered all U.S. requests to bring North Korea to heel. Every single time Kim Jong Un fires off a missile, the U.S. will use said missile as target practice for its anti-missile batteries, thus making our anti-missile capabilities more and more lethal with every launch.

We could do the same thing for Japan, if we could do it in such a way, that Japan would not return to its imperialist ways of World War II. This could be a new type of deterrent for Western alligned nations, seeing that China and Russia seem to aid and abet loose cannons such as Iran, North Korea, Syria, Pakistan and Iraq in their quests for nuclear weapons.

Filed under Solution To Korean Crisis