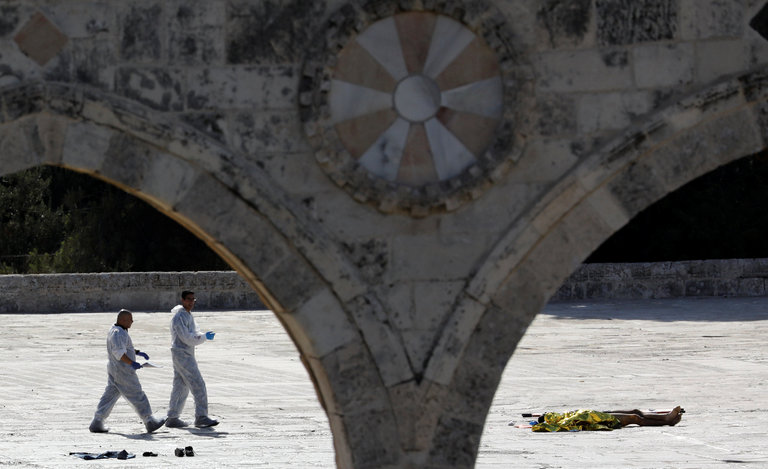 The Muslim hornet’s nest at Al Aqsa swarms once again, stinging three Israeli officers and killing two of them near the Lion’s Gate. The Islamic terrorists fled to the Temple Mount area where they were gunned down and died. How long will Israel suffer the heathen infidel Islamists at the Temple mount? How long will it be, until the Almighty says enough? The so-called “status quo” at the Temple Mount is a temporary reality, that will one day come to a screeching halt.

Even though I am a Christian; I know that the Temple Mount does not belong to Christians, but to the sons of Jacob. Also, it is impossible that the Temple Mount belongs to Islam, because Islam did not even exist until the seventh century A.D. Al Aqsa Mosque and the Dome of the Rock are merely temporary desecrations.

First Chronicles 11:4-8 is the historical account about King David conquering the Jebusites at Jebus, also known as Jerusalem. After that, King David bought the threshing floor of Araunah the Jebusite for 600 shekels of gold and sacrificed unto YaHVeH there (First Chronicles 21:25-28). David’s son, King Solomon, built the first temple at that same location in Mount Moriah (Second Chronicles 3:1).

It is a known fact, that King David ruled Israel and Jerusalem approximately 1000 B.C. Let’s get real here people: the so-called Islamic claim to any part of Israel or Jerusalem rings completely hollow. They are merely squatters.

Because Israel sinned greatly before Almighty God, YaHVeH allowed the Romans to conquer them. Israel was dispersed among the nations for over 1800 years. Against all odds, YaHVeH returned the sons of Jacob to their land as He promised He would and they remain there to this day. The rest of Jerusalem was reconquered by Israel in 1967.

The “Times of the Gentiles” is not yet over (Luke 21:24). Israel itself mysteriously continues to allow the infidel Gentile Islamists to trample the Temple Mount and in Jerusalem. This must surely be at the hand of Almighty YaHVeH, but that time is coming to an end. When the time is ripe, the Third Temple will be built, the false-Messiah will sit in it proclaiming that he is God, and then the real Messiah will come and bring about the consummation as it is written in the scriptures.

Filed under More Blood Spilled At The Temple Mount