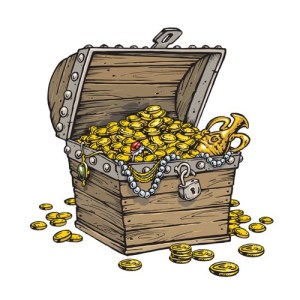 In the Book of Matthew 25:14-29 we find and interesting parable put forth by Yahshua Jesus. A man preparing to go to a far country entrusted his assets to his servants. He entrusted five portions of money to one, two portions of money to another and to yet another he entrusted one portion of money. He then departed. After a long period of time had passed, the man returned and took account with his servants concerning their handling of his assets. The one who received five portions had engaged in business activities resulting in an increase of five additional portions totaling ten portions. The one who had received two portions was also a diligent and responsible person, and he now had four portions. The master of those servants commended them and rewarded them generously. The third servant who received one portion of money did absolutely no commerce with his portion, but buried it in the ground and presumed to return the portion to his master without any gain. When confronted, he accused his master of being a hard man with unusually high expectations. Well, the master of that servant was very wroth and called him wicked and slothful. The master took away his single portion and gave it to the servant who had ten portions and then cast the wicked/slothful servant into outer darkness where is weeping and gnashing of teeth.

Well, I want you to think about this. The master is of course Almighty God. He has delivered various sums and abilities to you and to me. He EXPECTS us to be active with these assets. To do nothing with what we have been given is totally and completely unacceptable. This is what Almighty God refers to as being wicked and slothful. If you read the passage carefully, you will see, that the master expected at the very least to receive interest on the single portion he had entrusted to that servant. I also want you to notice, that the master did not give precise instructions of how to proceed with their activities; He simply expected them to make good use of the things he had entrusted them with.

Conclusion: Liberals/progressives encourage slothfulness by plundering the treasures of hard workers and distributing it to the slothful. Liberals/progressives have turned our nation into a welfare state. Their rhetoric may sound good, but the result is billions of dollars wasted on people, who squander their God-given abilities with idleness. Second and third generations are infected with this slothfulness. Hard work is a virtue and every human should aspire to be a hard worker. There are times when a person may be down on their luck and need a helping hand, but providing a government entitlement is not the answer. When a person knows that a handout is coming on a regular basis, they become lazy and unmotivated to act responsibly. When receiving a regular handout becomes unlikely, the needy person is significantly more motivated to act responsibly in working to secure their needs. This is both beneficial to the giver and the givee. Second Thessalonians 3:10 says, “….if any man will not work, neither should he eat.” In this age of cell phones and computers, many physically challenged persons can sit in a wheel chair at a desk and provide a valuable service to society. I can almost hear some liberal/progressive saying that I am harsh and unloving; however, I would like for them to explain why they reject the counsel and wisdom of Almighty God and exalt their own ideas above the throne of the Creator? Reread the above parable in the Book of Matthew chapter twenty-five. It is both obvious and clear, that the Almighty EXPECTS every human to be reasonably engaged in productive activity. He does not expect anyone to do more than they are able, but He does expect us to do the best  we can with what we have been given, and we will most certainly give an account to Him on the judgment day.