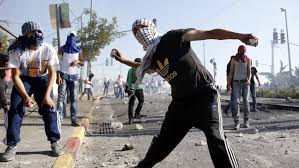 Imagine a teenage boy throwing rocks at you. Imagine the rock hitting you squarely in the face, eye, forehead, temple, nose region of your body. Imagine the very hard object traveling at 40-60 miles per hour. You will be severely injured and possibly killed.

This is reality on the Temple Mount in Jerusalem. Muslim young men attack passersby with rocks. You see, the Muslim men are mostly afraid to openly attack like this, so they use minors to do their dirty work, in order to create a dilemma for Israeli authorities. If Israeli authorities respond harshly, then the coward Muslim men can accuse the Israelis of abuse and disproportionate use of force. It is all a wicked trouble-making scheme from the pit of hell.

The Temple Mount belongs to Abraham, Isaac and Jacob’s descendants, the Jews, as an everlasting possession. (Genesis 17:8, 48:3-4)   YaHVeH gave it to them and He is Sovereign of the Universe.

This would be the punishment fitting the crime: a stone for a stone. Anyone who protested this plan, would be quietly exhorted to not throw stones at passersby on the Temple Mount.

Long live Israel and the sons of Abraham, Isaac and Jacob.